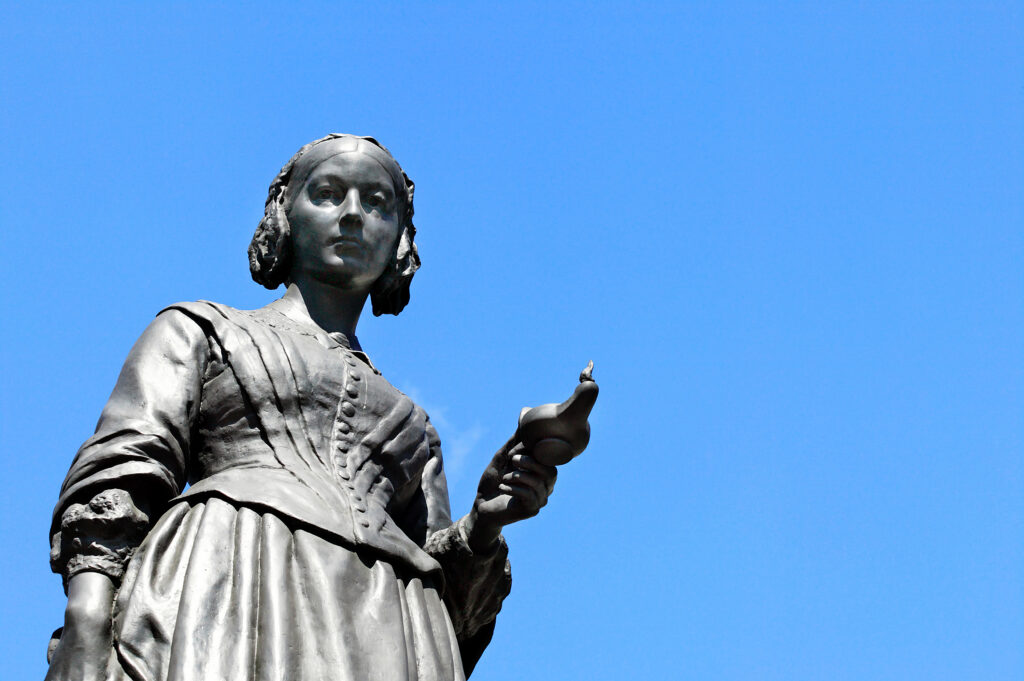 In an extremely rare recording, the voice of Florence Nightingale was recorded on an Edison Parafine Wax Cylinder, on July 30th, 1890. On the brief recording, which you can still hear today, Nightingale’s delicate voice explains her hope that, “When I am no longer even a memory, just a name, I hope my voice may perpetuate the great work of my life.”

Little did the “Lady with the Lamp” know that her life’s work would be remembered, honored and celebrated well into the twenty-first century. In her day, she was the recipient of many honors and accolades, but, surely, she could never have guessed the countless ways in which her legacy would live on.

The Florence Nightingale Museum in London displays her life’s work. Her story has been told in countless films, plays, TV series and books. She has been commemorated on both a British ten-pound banknote and a German postage stamp. There are statues and hospitals around the world named after her. The U.S. Air Force and KLM airlines have both named aircraft after her. She even lives on in the heavens. The Nightingale Corona on the surface of planet Venus was named after her, as was a massive asteroid dubbed “Florence,” which shot past the Earth in September of 2017.

That’s quite a lot of recognition for a humble but very ambitious woman whose entire life’s work was dedicated to the care and welfare of others. Her reach and legacy have extended over time and generation, not because she ever sought out the spotlight or drew attention to herself, but because of her tireless campaigning, meticulous documentation and public advocacy for proper health care and sanitation for all. As they say, in this life, you get what you give.

With her memory and her legacy still so prevalent around the world, it begs the question, what would Florence Nightingale be doing if she were alive today? Given her early experiences, she would likely be involved in military and veteran’s care and the emerging holistic and integrative health programs we see today. She would surely be an advocate for equal access to quality care, and probably fascinated by modern discussions about clean air, water and climate change. As a meticulous statistician, she would also have been dazzled and delighted by the vast possibilities of data analytics.

Whatever path she may have taken, Florence would have undoubtedly applied her infinite curiosity, unyielding devotion and tremendous intellect to make a lasting impact. She always believed that nursing as a profession that had the power to genuinely change lives and oftentimes save them. She knew that every act of kindness counts, and that it is what you do and what you give that matters most in this life, not what you get and what you take.

Florence Nightingale began her life’s work in the darkness and despair of a gruesome and filthy war. It is extraordinary to think that even in such humble beginnings a true vision of hope can be born. On May 12th, we celebrate the 200th anniversary of a solitary woman who went on to become a legend. And as modern-day nurses, when times are challenging and strength is needed, we need only think of the small, Turkish candle lantern that Florence Nightingale carried on her rounds through the dark corridors of the Scutari Hospital.

Disclaimer: The views, opinions, and/or information contained herein are for informational and/or entertainment purposes only. Although they are generally intended to align with our policies and positions, they may not necessarily reflect the American Nurses Association Enterprise’s official policies and/or position statements.